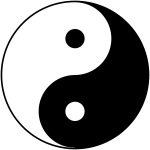 By the influence of Taoism and the recent medias, when Yin and Yang are mentioned, the symbol of Taiji (great polarity in direct translation) is the first thing that comes to most people’s mind. And misconceptions of Yin and Yang happen. For example, many associate Yin with evil or bad while associate Yang with positive or good. In truth, Yin and Yang are complementary and not contradictory, and neither is considered as good and the other as bad. Like how Yin and Yang are described in the original meaning, when there is a sunny side, there must be a shady side, and they are just states or conditions that are relative to each other.

After thousands of years of study, the relativity theory of Yin and Yang has grown into a system. Yin and Yang are described at all levels of our universe and here are some of the general correspondences:

Put the concept of Yin and Yang, in Tradition Chinese Medicine, it was first mentioned in Yellow Emperor’s Inner Canon – Basic Question (Huangdi Neijing – Suwen, 黃帝內經－素聞). In Chapter 1 – Discourse on the True Heaven in High Antiquity,

“I have heard that the people of high anyiquity, in [the sequence of] spring and autumn, all exceeded one hundred years. But in their movements and activities there was no weakening. As for the people of today, after one half of a hundred years, the movements and activities of all of them weaken. Is this because the times are different? Or is it that people have lost this [ability]?”

“The people of high antiquity, those who knew the Way, they modeled [their behavior] on yin and yang and they complied with the arts and the calculations. [Their] eating and drinking was moderate. [Their] rising and resting had regularity. They did not tax [themselves] with meaningless work. Hence, they were able to keep physical appearance and spirit together.”

In Chapter 5 – Comprehensive Discourse on Phenomena Corresponding to Yin and Yang,

“As of yin and yang, they are the Way of heaven and earth, the fundamental principles [governing] the myriad beings, father and mother to all changes and transformations, the basis and beginning of generating life and killing, the palace of spirit brilliance. To treat diseases, one must search for the basis. … “

Here “basis” in Chinese character is “本” which means the source or origin of Yin and Yang. All the inner substances and functions within our human body have their origin of Yin and Yang. And the same applies to our surrounding, the four seasons, five elements, wind, cold, damp, heat, dryness, and etc. For those who want to read more, here is the link to this translated text in Google books.

In modern Traditional Chinese Medicine, Yin and Yang are used as tools to help differentiate the pathology and the treatment strategy. For example, for a patient with main complain of menstrual cramp, the Traditional Chinese Medicine physician can put all the signs, symptoms, pluse, and tongue together to see if the source is the pain is due to deficiency in Yin, excess in Yang, or others. Then, to treat the symptoms accordingly.

There are so much more about Yin and Yang as they are what Traditional Chinese Medicine stands on. The whole universe can be elaborated from Yin and Yang. As mentioned in Chapter 5 of Yellow Emperor’s Inner Canon – Basic Questions, Yin and Yang are the fundamental principles to all changes and transformations.

← A little reading about depression
Smile is the best medicine →

Check out Solution Heal on Yelp